As Turkish soap operas reach increasing numbers of viewers in the Arab world, the sight on TV screens of Muslims drinking alcohol or conducting adulterous relationships is becoming commonplace – and the shows have presented a new image of relations between man and woman.

At the start of the protests that recently swept Turkey, journalists picked out one man with a luxuriant beard among the youthful crowds in Istanbul’s Taksim Square.

Later he met the Turkish PM as part of a group hoping to mediate between the government and demonstrators.

That man is Halit Ergenc and he is internationally famous largely because of his role as a Sultan – hence the beard – in a Turkish TV costume drama, Magnificent Century (Muhtesem Yuzyil), that has been sold to dozens of countries.

It’s one thing if there were a couple of popular Turkish series, but they are on every single major Arab channel”

Set in the Ottoman world, it spins the yarn of Suleiman the Magnificent, the longest reigning Sultan, and his love for a Western woman in his harem, with whom he becomes obsessed, and eventually marries.

About to film its fourth season, it is one of the shows that earned Turkey $130m in foreign sales last year – up from a mere $1m in 2007.

That it looks back 500 years to the era when Turkish Sultans ruled much of the Balkans and the Middle East is perhaps appropriate, as it has been seen in 47 countries mostly from this region.

The exported shows rely on a heady mix of slick production, storylines full of passion and intrigue (there was plenty of that in Suleiman’s court), beautiful actors and actresses, and iconic Turkish locations.

Take Forbidden Love (Ask-i Memnu). It is set in a mansion on the Bosphorus and tells the story of the forbidden passion between a handsome young man, Behlul, and a beautiful young woman, Bihter, who is married to his uncle.

They live under the same roof. You know this is not going to turn out well.

Behlul is played by Kivanc Tatlitug, who has become a heartthrob in the region and, due to his light-coloured good looks, even been dubbed the “Halal Brad Pitt”.

Like Magnificent Century, it has its fair dose of love scenes, which may seem tame to a Western audience, but are eye-catching by the standards of Arab countries.

Some 85 million people in the Arab world were glued to the final episode of breakthrough show Gumus (Silver) in 2008, and the audience for Turkish dramas has grown year by year.

It’s partly because they fill a gap in the market.

“There is definitely a shortage of good scripts and high production values in Arab television,” says Habib Battah, a Beirut-based media critic and author of The Beirut Report blog.

“It’s one thing if there were a couple of popular Turkish series, but they are on every single major Arab channel.”

Previous imports had included soaps from Latin America, but these had less impact, Battah says.

One reason for this is that they were dubbed into classical Arabic, while the Turkish dramas began in 2007 to be dubbed into a Syrian dialect.

This made the stories “more engaging” and “the voice actors more believable”, Habib says.

Another reason is that the Arab audience feels so much closer to Turkish culture than, say, Brazil’s.

Fatma Sapci, head of acquisitions at production company Ay Yapim, which was behind Forbidden Love, says this makes it easy for audiences across the region to consider the show’s actors as “part of their family”.

And these soaps explore family dynamics in challenging ways.

“Turkish serials deal with many issues that Arab television is afraid of dealing with such as gender equality, treason and love affairs, and discussing the subject of illegitimate children born outside of marriage,” says Professor Asli Tunc, head of the Media School at Istanbul Bilgi University. 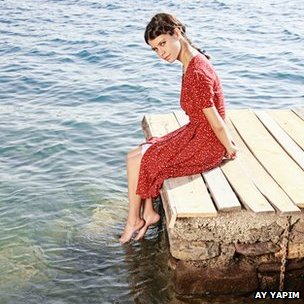 What is Fatmagul’s crime? triggered a debate about the law that excuses a rapist if he marries his victim

But possibly the biggest talking point among the audience has been the topic of male-female relations.

Some of these shows speak to female viewers by featuring unorthodox male leads, who are romantic instead of being macho, Tunc says.

Silver/Gumus, for example, depicts a romantic love between the heroine Gumus (called Noor in the Arab world) and her husband Mehmet (Muhannad).

Women would remark to their husbands on how well the lead character treated his wife – it set a romantic ideal where “women are valued, appreciated and adored,” says Mazen Hayek, spokesman for the Saudi-backed Middle East Broadcasting Centre (MBC).

The impact of the show was such that Arab women “started talking to their husbands through Turkish drama”, he says.

And because the characters on screen had plenty in common with Arab audiences, it was more controversial as well as easier to relate to, he says.

In 2007 MBC began dubbing Turkish shows into a Syrian dialect. We wanted to build on the success of popular Syrian drama Bab al Hara.

Previously shows had been dubbed into classical Arabic which created a disconnect for viewers. What they were hearing was much more rigid than what they were seeing.

The Syrian dialect is much closer to how people speak. We opted for professional Syrian voice-over actors and made sure they matched the personality of the characters.

But Dr Dina Matar from the Centre for Media and Film at the School of Oriental and African Studies in London cautions against the idea that the dramas have led to a “fundamental shift” in attitudes toward women in the region.

Instead they have fed into a debate that had already begun, in various shows produced by Arabs and aired on Arab television, she says, as the media space in the Middle East has expanded.

The export of these dramas has occurred in parallel with a push by Turkey’s foreign minister, Ahmet Davutoglu, to boost Turkish cultural power – a policy sometimes described as neo-Ottoman.

While the government has created Yunus Emre Cultural Centres – akin to the British Council or the Alliance Francaise – in a number of countries, the shows have also played their part in presenting a positive image of Turkey.

The Culture Ministry directly links the dramas with a rise in the number of tourists to Turkey from Arab countries in the last five years.

Izzet Pinto, CEO of Turkey’s Global Agency – which distributes Magnificent Century and other top titles – puts it like this: “We are showing our country to millions of viewers. We are showing the beautiful scenery, our lifestyle and traditions.

“So we have a great influence on people through soft power.”

Istanbul’s Beyoğlu municipality repainted the rainbow steps in the Fıkdıklı-Cihangir neighborhood in the early morning of Aug. 31, only a day after they had painted over them in grey, triggering an outcry from locals.The Beyoğlu mayor had personally expressed his regret over the controversial “graying” of the previously rainbow Fıkdıklı-Cihangir neighborhood steps on Aug. 30, vowing to “color up” all the steps in the area linking the shore to the hillside.

“We have finished our works on the colorful steps. We will gather together the residents and organize a small plebiscite. My vote is ‘yes.’ I hope the votes of the residents will be the same,” Ahmet Misbah Demircan said via Twitter on Aug. 30.

“I can say that an era of colorful steps will start in Beyoğlu,” he added.

Locals had reacted strongly after municipality workers painted grey the famous “rainbow” steps, which had been orginally colored by a retired local “to put a smile on people’s faces.”

The mayor praised the project but defended the municipal workers, saying they had acted following a complaint.

The stairs have been repainted

in the early hours of Aug. 31.
DHA photo

“One of our citizens took a decision and offered Beyoğlu such a beautiful project. However, he made a methodological mistake. Not only did he not apply to the municipality, but he did not inform the other residents in the neighborhood,” Misbah Demircan said, adding that this had led to complaints.

“Our friends [the municipal workers] who considered these complaints were obliged to paint over those colors,” he said.

Local resident Hüseyin Çetinel had taken it upon himself to paint the nearly 200 stairs with an assistant, Volkan Tecimeroğlu.

Çelikel painted only three of the steps at first, but said he decided to paint them all after hearing very positive comments from passers-by. Joined by three of his friends, he spent around 1,500 Turkish Liras, nearly $725, with the painting taking one week and 40 kilos of paint.In response to the graying, social media users had already organized an event to repaint the steps, which was set to take place on Aug. 31 at 5 p.m. The event called on everyone to gather at the stairs to create the rainbow again.

“Take your brush and come,” became a call on social media websites, while thousands used the #resiststeps hashtag on Twitter and Facebook, becoming Twitter’s most trending topic.

Istanbul-Gyeongju World Culture Expo 2013 will begin with a ceremony at Ayasofya Square in Istanbul on Aug. 31, 2013

Istanbul-Gyeongju World Culture Expo 2013 will begin with a ceremony at Ayasofya Square in Istanbul on Aug. 31 so as to constitute a cultural tie between Istanbul and Gyeongju province of South Korea.

Countdown for Istanbul-Gyeongju World Culture Expo has started, according to a statement of Istanbul Metropolitan Municipality.

The expo which is hosted by Istanbul Metropolitan Municipality, Korea’s Gyeongsangbuk-do province and Gyeongju Municipality will last till September 22, 2013 and have 28 activities at 35 places.

Korea state television accompanied the convoy along the voyage and will prepare a documentary film about the voyage.

In addition, about 1,500 guests from various countries will attend as well as the mayors of the provinces on the Silk Road route and Turkish Prime Minister is also expected to attend the expo.

Coca-Cola’s annual open air music festival, Rock’n Coke, will be celebrating its 10 year anniversary on 6, 7 and 8 of September at Hezarfen Airport. The festival has established itself over the years as the largest open air festival in the country.

This year’s line-up boasts a fresh set of bands visiting from around the world. Headliners, Arctic Monkeys, will be the main attraction, but several additional big names have been scheduled to perform.

Organizers have increased the number of stages for this year’s festival, aiming to provide a wide variety of artists from different genres. As a result, the event should have a little something for everyone.

The following artists will be making appearances:

Early bird tickets have already sold out, but advance tickets can still be bought online via Biletix. Purchasing tickets at the door is also possible, but prices will be substantially higher.